Effects of DCPP Conclusions on Family Law Cases in NJ

How can Administrative Findings in a DYFS Case Affect Other Family Law Issues in NJ?

Divorcing spouses often find themselves in custody battles, with each parent touting their superior parenting skills while disparaging the other’s. But once allegations of child abuse or neglect enter the picture, parties may involve New Jersey’s Division of Child Protection and Permanence (DCPP), an arm of the Division of Youth and Family Services (DYFS). Child abuse or neglect allegations prompt the agency to investigate the parent or parents alleged to have committed the abuse or neglect. Once DCPP investigates, warring parties may find the agency both a help and a hindrance. Either way, DCPP conclusions regarding abuse and neglect can affect other family law matters, including divorce and child custody cases.

No matter who notifies the agency, DCPP is obligated to investigate, starting with interviewing the accused party. From there, the agency investigates further or closes the case with findings of unsubstantiated abuse or neglect. An accused parent may use an unfounded case as proof of safe parenting, though DCPP has various reasons for not pursuing a child abuse/neglect case. For one, the abuse or neglect may not rise to the level for the agency to act. It may have been a single wrong moment by an otherwise good parent. Another reason may be that the parents are already in a custody battle, so the agency may feel the child has the court’s protection and resources to investigate.

However, when social workers get involved in a custody dispute, there are actions that accused parties and their attorneys can take to strengthen their position with DCPP and in a custody dispute. They can outline their position, including the accuser’s (if it is the other parent) potential abuse of the division’s process to fight a custody battle. In other words, the accuser may be weaponizing DCPP to win the custody battle, whether they initiated the custody battle and DCPP referral or responded to the accused’s child custody action with a referral to DCPP. And either side may present the division with interviewees to strengthen their custody case.

Using a Title 9 Case to Change Child Custody in NJ

After its investigation, DCPP may find abuse or neglect substantiated against one or both parents. For example, DCPP may find one parent abusive and the other neglectful for allowing the abuse. Depending on the severity of the abuse or neglect, DCPP may remove the child from a parent’s custody or require the custodial parent to prevent the accused parent from contacting the child pending the division’s no-contact and removal court order.

After a child abuse or neglect finding, DCPP develops a Case Plan for the family, with the aim of family reunification, services, and education if appropriate. The plan may have unsuspected advantages and disadvantages for both parents. For example, an accuser with custody may have to defy a family court custody order to comply with a DCPP plan when the plan recommends keeping the children away from the accused. When the accused has visitation rights, the custodial parent must get the existing order modified to comply with DCPP’s plan to avoid violating a court order. The same situation applies when DCPP’s plan requires the accused parent to change custody to remove the children from the other parent’s custody.

In either case, a custody change initiated by a DCPP case plan may bring the agency and its entire file into family court. A court may enlist DCPP in an ongoing custody battle or a subsequent dispute prompted by the Case Plan requirements. But if either parent refuses to initiate a custody change upon the division’s prompting, DCPP can bring a Title 9 Child Protective Services Complaint to change custody. However, a Title 9 complaint is not only for DCPP. Anyone obligated to report child abuse, or neglect may file a complaint or urge the division to do so.

Barring a Title 9 complaint, DCPP’s substantiated abuse or neglect finding is beneficial and detrimental to both parties. The accused parent has an uphill battle with a substantiated finding, especially if there is a documented history of domestic abuse. But even without such a history, a court may favor primary custody to the non-offending parent, especially if a child’s testimony supports the finding. Since DCPP may speak directly to children, the court, which typically does not interview children, gets the child’s point of view. A child’s interview responses may influence a judge, despite children’s tendencies to protect parents and mistrust strangers.

And while both parents may file a Title 9 complaint if DCPP does not, either may be limited. One key consideration is evidence. Since the rules of evidence in a Title 9 Complaint are more expansive, both sides are subject to hearsay evidence that would not be allowed in a family law court. Thus, a Title 9 judge may review and rely upon whatever is relevant and material in a DYFS file, including hearsay reports and opinions. However, the discovery rules and timing may affect the availability of DYFS files. Discovery rules are limited by court order initially but are overall liberal. Thus, all parties may present nearly limitless material from DYFS files, though opposing parties may cross-examine the evidence’s reliability and competency. Therefore, the advantage to Title 9 plaintiffs is the damning evidence a judge sees that they would not consider in a family law custody action, including expert opinions and conclusions DCPP relied on for their findings.

On the other hand, initial discovery limitations may cause delays and expenses. The court approves and limits discovery requests, so scheduling depositions or custody evaluations must have court approval. And a judge may only approve some requests. And since private Title 9 complaints are uncommon, a family law judge may oversee a complaint rather than a Children in Court judge who is more familiar with Title 9 cases. As such, the family law judge may need more preparation to adjudicate a Title 9 case. Finally, when DCPP passes on a complaint because a custody change in family court is underway or imminent, the defendant may argue the allegations against them are unfounded, a disadvantage to plaintiffs.

Cracks in DCPP Findings and How to Benefit From Them

The accused may capitalize on a DCPP finding’s weaknesses. DCPP is a busy, understaffed agency that may make hurried decisions to reduce caseloads. Moreover, the agency often errs on the side of caution and, thus, substantiates most abuse and neglect findings. More importantly, the conclusion is only as persuasive as the case worker’s experience, competence, and expertise of the caseworker. A sloppy, inexpert investigation may yield inaccurate results, though mistakes may cut both ways. And when the division found a substantiated claim but recommended no family services, one may infer that the abuse or neglect is neither ongoing nor a future risk to the child.

Other reasons to downplay DCPP findings are procedural. DCPP and the family court have distinct fact-finding processes and evidence weighting. DCPP has no rules of evidence that constrain a court of law. So, caseworkers ca 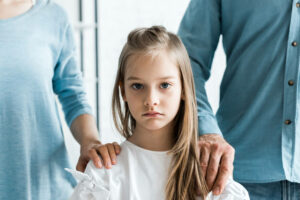 n report and rely on hearsay, which a family law court may not. As such, the court must carefully review a DCPP file for relevant, admissible evidence and not take the findings wholesale as conclusive. On the other hand, a DCPP order is challenging since an administrative appeal often exceeds the timeline of a custody dispute. Therefore, a family court must determine abuse or neglect or await the outcome of a lengthy appeal to inform the court’s decision. And finally, the family court must deeply and thoroughly examine a child’s safety considering various factors, not just the DCPP’s findings, which may need to be more formal and more flexible than a court’s safety analysis.

Protect Your Interests in a DCPP/DYFS Matter – Contact Us

When your custody action involves DYFS, contact a DCPP attorney at our New Jersey firm, who frequently handles these cases and knows how to protect your rights. Free consultations to discuss your case are available at our conveniently located law offices; we represent clients in towns and counties in New Jersey, such as Paramus, Union Township, Parsippany, Bridgewater, Middletown, Toms River, and Jersey City. For either parent, our lawyers’ DCPP experience can be essential to prosecuting or defending a custody dispute in court and carefully planning a strategy for a Title 9 case. Persuading a judge requires knowing the rules of evidence and court, disputing inferences, discrediting evidence, and exceptional ease and skill with child abuse and neglect investigations and Title 9 proceedings.  Contact (908)-356-6900 to speak with a lawyer now free of charge.

« What is the Punishment for Cruelty to a Child in New Jersey?
Child Abuse Offenses Addressed by Federal Law »