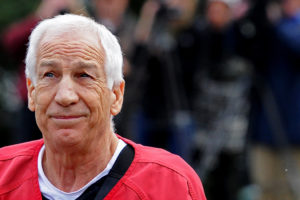 Sandusky, who has consistently maintained that he was wrongly convicted, argued that he did not receive adequate representation at trial and that prosecutors should have disclosed more details about changes in the victims’ stories. The judge who decided the request for a new trial held that “although he was denied access to the victims’ psychological records, Sandusky was permitted to call witnesses to explore whether the victims had undergone repressed memory therapy prior to trial, and he did explore that subject” with victims and other witnesses. The judge also rejected Sandusky’s arguments that his lawyers should not have let him waive a preliminary hearing, should not have allowed him to give a television interview after his arrest, and should have done more to challenge the identity of a young man described as Victim 2 in court records.

There are four regional IAIU offices in New Jersey:

If you were accused of child abuse or neglect while acting in the capacity of a teacher, coach, daycare employee, bus driver, or any other role, you should contact the experienced team of child abuse and neglect defense attorneys at the Tormey Law Firm to learn about your rights and to learn what to do during the investigation. We are available 24/7 and ready to guide you through your IAIU investigation – call us today.