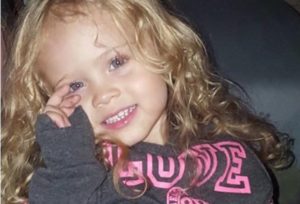 NJ.com reported on a tragic story in late July. According to the report, the Camden County Prosecutor’s Office have been investigating the death of a 3-year old child. The investigation began over a year ago and started when Charlotte Dawkins, an otherwise happy three old, fell down a set of stairs. However, according to the State’s medical examinations seem to indicate otherwise.

The Prosecutor’s Office has been targeting Travis W. Graham, who is the mother’s boyfriend. Mr. Graham is also being charged separately with several armed robberies. Graham is accused of robbing a Pantry One store with an air soft gun on Feb. 3, 2017; wielding a knife while robbing the Pine Run Deli on June 27; and driving the getaway car while his co-defendant robbed the Pine Run Deli on Jan. 24, with an air soft gun.

The child’s grandmother, Renay Rodriguez stated “her injuries were so extensive, there’s no way she fell down the stairs.” She believes the child was struck to death. Bill Townsend, who is chief of detectives with the Prosecutor’s Office stated, it had not yet been officially ruled a homicide by the medical examiner — hence his office could only confirm it was a death investigation. He further held that his investigators are awaiting documentation from another agency before pressing charges.

In addition, the State Department of Children and Families is required to release some information on child deaths that are caused by abuse or neglect. Charlette’s death, a spokeswoman for the child welfare agency said earlier this week, did not meet the neglect or abuse criteria, so no details would be released.

However, if a case was to move forward by either the Prosecutor’s Office of the Department of Children and Families, Mr. Graham will likely be facing the following charges. To start, he will likely be charged with Murder. To found guilty of murder, the State must provide beyond a reasonable doubt that the defendant knowing or purposely cause the death of another individual. In addition to the murder charge, the State may also charge Mr. Graham with endangering the welfare of a child. For that offense, the State must show, beyond a reasonable doubt, that a parent, guardian, or person who assumed responsibility for the care of the child, either harmed the child or placed the child at risk of harm.

If you are under investigation by DCP&P, have an upcoming child services hearing, or are facing criminal charges for child abuse or neglect, contact an experienced Camden New Jersey child abuse attorney to discuss what you can do to defend your innocence. Our experience means we are fully prepared to help you deal with a DCPP or criminal matter stemming from alleged child abuse or neglect in Camden County. Call 2015-556-1570 or contact us online to arrange your free confidential consultation.